Although Gold Beach had been a community since the middle of the 19th century, and the county seat since 1859, its incorporation charter is dated 1945.

Prior to 1850 there are very few accounts of anyone other than the Native Americans having been here. One account was of Jedediah Smith who came up our coast in 1828. The Smith account is quite amazing and can be looked up online if you are interested.

The coastal Natives of this immediate area spoke the  Athabaskan language which is similar to the Apache, Navajo and other native tribes from Alaska. Only a few tribes in this small area were Athabaskan speaking.

Other visitors, most likely arrived by ship, but apparently no one stayed.

Gold Beach was originally named Ellensburg in the 1850’s, but later became known as Gold Beach because of a name given to  some of the beach’s near the mouth of the Rogue River where there were hundreds of gold mines. The towns name was  changed to Gold Beach in 1890.

The Mailboats based here have been delivering mail upstream to Agness since 1895. More information about this famous boat tour company is online. 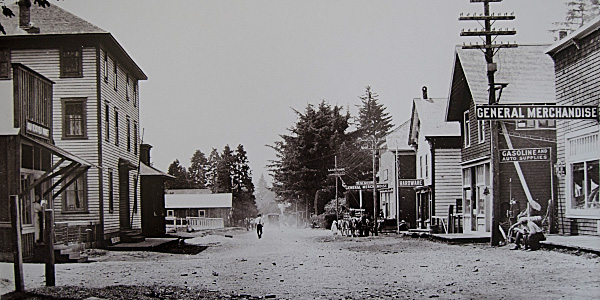 Gold Beach, Oregon about 1915. Contributed by the William Turner Family

During the mid to late 1800’s R.D.Hume an early settler, built several steamboats for delivering goods along our coast . He also established a cannery and a hatchery during that time. More about him on our page about the Mary D Hume.

The late 1800’s mining became more and more a local industry along with commercial fishing in the Rogue River. In the 1930’s logging  started to become a viable profession and during the 1930’s through into the 1970’s there were many small sawmills scattered through the mountains east of Gold Beach and up the Rogue River. As a result of this there were many logging camps, scattered out in the mountains. In the 50’s logs were sometimes rafted down the Rogue for transport to various mills in the area. During the 60’s there were at least 20 large sawmills within a 10 mile radius of Gold Beach. These mills rapidly disappeared, and the whole area in the 1980’s saw the last of them disappear, with the exception of two in Brookings.

R.D. Hume built an empire with the raising of salmon in his hatchery and the collection of tons of eggs for this purpose. His commercial fishing in the Rogue was accomplished by using his fleet of gill netting boats. He was known as the “Salmon King of Oregon”. He and his fleet of gill-netting boats controlled most of the anadromous fish population of the river fishing its lower 12 miles. In 1935 The State of Oregon banned gill-netting.

The salmon runs in the Rogue were so profuse, that famous politicians, movie stars and high ranking military personal made the rigorous trek to Gold Beach to hire guides for the pleasure of catching a big fish. Now the population of salmon and steelhead is dwindling and there are major efforts to rebuild the habitat and work to save the native fish. Gold Beach has 30 commercial guides. Most are licensed to fish all the streams in the area, including the Rogue, Sixes, Chetco and even as far north as the Columbia.

We have been exceeding our guests expectations for over 24 years!