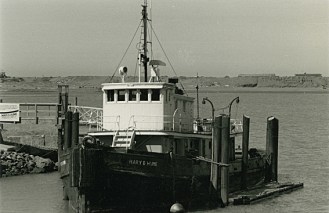 The Mary D. Hume was a steamer built at Gold Beach, Oregon in 1881, by R. D. Hume. Hume was a pioneer and early businessman. He commercially fished the Rogue River, and built a fish hatchery at Indian Creek and also a large cannery near the mouth of the Rogue River. More About Hume and the history of this area.

Early on The Mary D. Hume was a freighter hauling goods between Oregon and San Francisco. Later she was used as a whaler in Alaska, sometimes wintering over in the ice so as to be there early to start hunting whales as the ice thawed. Her last operations were as a tugboat in the Puget Sound area. She was retired in 1977 and returned to Gold Beach as a result of the owners agreeing to donate her to the Curry County Historical Society. The community effort to bring her down the coast under her own power was notable. But in 1985 she sank due to an improper setup for the support system. She is listed on the National Register of Historic Places.

We have been exceeding our guests expectations for over 24 years!